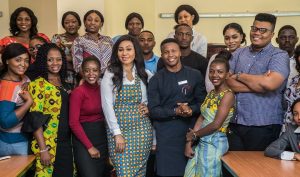 I recently read a report done by McKinsey Global Institute titled “The Power of Parity – Advancing women’s equality in Africa and the barriers mentioned are key to note because women experience barriers to career climb differently from men. Read the 5 barriers from this report on how to expand your understanding and arm you with what you need to move ahead of your career.

Women in senior positions who were interviewed for this report highlighted five main barriers to gender equality in the formal workplace:

In many African countries—and many countries around the world—the assumption that women are largely responsible for caring for children and the elderly, and household chores is widespread. Such attitudes are entrenched from childhood. A survey of children in Côte d’Ivoire found that 68 percent of boys and 56 percent of girls think that domestic chores are a women’s responsibility.

Unconscious bias in the workplace.

Business leaders in Africa are typically mostly men. Although there has been progress on getting women into the top echelons  of business, the fact remains that only about 6 percent of CEOs and 22 percent of executive committee members are women and about 25 percent of board members are female. Having few women decision makers entrenches bias that shows up in the way women are compensated, rewarded, spoken to, and treated in their workplace.

A significant number of workplaces do not account for needs that are specific to women, for instance, providing flexible working arrangements and spaces for nursing mothers. They are typically more attuned to male needs because  the culture expects men to be the primary workers. Interviewees highlighted today’s “anytime, anywhere” performance model, which penalises women carrying the double burden more than men.

Lack of sponsorship for women.

Women typically have access to mentors for guidance but lack adequate sponsors who advocate for their promotion, introduce them to key stakeholders, and give them exposure to senior roles.

Some women limit their own prospects, being reluctant to take risks, network with colleagues, and advocate for their own advancement. One interviewee said that she regretted “not coming out of my shell earlier in my career” and another said the lack of confidence was women’s biggest barrier.

As a young woman looking to rise in any chosen career field, these barriers are man-made and can be challenging to overcome but worth every moment when your goals are achieved. Be intentional and deliberate about your choices, information is essential in navigating successfully.

Read “How to hold it down in a male dominated industry”