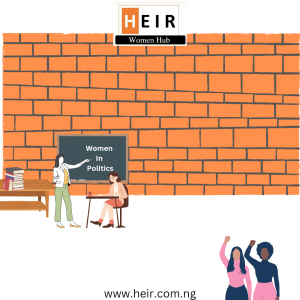 For some decades now, women have been actively involved in politics although when compared to the participation of men, the turnout of women becomes poor. women globally form about 50% of the world’s population but this hasn’t influenced women’s political representation.

Bringing it back to Nigeria, we have a very low turn of women in political representation. Yes, when it comes to the total number of women with PVCs, women are not left out as the population of women who have franchises can determine who becomes the next president of Nigeria. Against the 2023 general elections, at the national level, we have just one woman vying for the post of Vice president amongst the 18 registered political parties according to INEC.

In as much as the representation is low, women still have the power to make a change come 2023. It goes beyond having a PVC, let us take it a step further to coming out during the elections and voting for leaders who are after the good of her citizens.