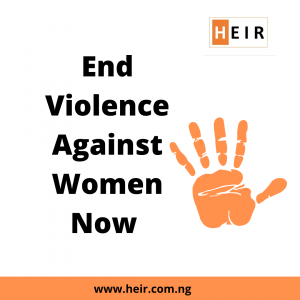 Studies by UNPA show 3 in every 10 Nigerian women have suffered physical violence by age 15. This violence includes battering by a partner.

In addition, 30% of women between the ages of 15-49 have been sexually abused. 43% of girls in Nigeria get married against their will before they turn 18 and 17% before they turn 15. Thus, denying their access to education, and endangering their health as this comes with health implications for instance between 400,000-800,000 Nigerian women suffers Vesico-Vaginal Fistula every year with a projection of 200,000 new cases.

Quite a number of women have lost their lives as a result of genital mutilation which is considered as a cultural practice among some groups in Nigeria. Sadly  sexual harassment and rape has gradually but steadily become the order of the day. These among many factors has helped in the further destruction of the women’s self esteem and ger voice is being silenced as she is not giving a platform to air her grievances. When she is permitted to speak up against the violence she is being subject to, very little or no action is taken against the perpetrators. Hence, leaving her with no option than to continue to suffer in silence and limiting her contributions towards the growth and development of the society.

It is therefore imperative that stakeholders come together and form a synergy against this enemy that is out to destroy both the woman and the society inclusive. It was be a great thing for the government to pass the GEO Bill into law and ensure the full implementation of all laws and policies on violence against women.