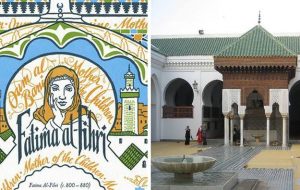 The University of Al-Qarawiyyin is considered to be the first university in the world’s history. It was founded by a young Muslim migrant; Fatima al-Fihri. whose despite the odds was committed to her vision.

Fatima was forced to leave her city Qairawan as a result of unbearable taxes and upheavals. Fatima and her family move to the then Fez now known as Morocco. During this period people lacked access to necessities of life and Fatima being empathic was determined to provide them with those necessities they were deprived of thereby becoming a Ray of hope for them.

Just when there was a beam of light for this young woman, a tragedic situation happened causing her to loose her loved ones – husband, father, and brother. Although torn and in despair, Fatima did not allow this to affect her resolve to offer great assistance to her people. Both Fatima had a fiery passion and a desire to change their world positively.

Growing in a family where education was given priority, Fatima was famous for her intelligence, generosity, and wisdom. In 859 constructed a place where people could go to and acquire education without any hindrance. First called a Madrasa, this later became the first University in the world as it preceded the University of Bologna with over two centuries. She named the university after her hometown – “University of Al-Qarawiyyin.

Fatima engaged actively in charity and community services with a strong commitment to education. Interesting to note that both Fatima and her children studied and earned their degrees from this institution as she introduced the concept of the institution awarding degrees. The University is renowned for producing great scholars that have shaped the history of the world.

During the dark years, females were deprived of the right to study in the institution. However, in the 20th century, their rights were restored. As the saying goes – “investing in female education has a huge return on investment.” This we can see in the case of Fatima whose family made education a priority and this enable Fatima to provide her people with an educational institution that the world’s development can be attributed to. Therefore, families need to make female education a priority as it is a key to societal growth and development.