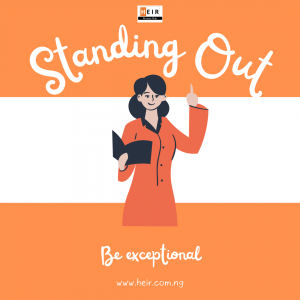 Standing out in a world where copycatting is now a norm is quite a task. A lot of folks have settled for following the trend people create. No one wants to set the pace; they just want to move with the tide and are very comfortable in doing so.

In all of these, we still have a few persons who have taken the bull by the horn and have decided to disregard the ‘trending’ cliché and do something jaw-dropping.

The reality remains that trying out something new isn’t always easy but when the results spring forth, it is always beautiful. The Wright brothers were seen as confused when they made several attempts to create an airplane. Their persistence ended in massive victory. Though Thomas Edison had 99 failed attempts at creating the light bulb, he never relented to try one more time and that was how he was able to invent the lightbulb we all use today.

Even in the entertainment industry, we have people who have created different genres of music. Talk about Hip-hop, RnB, Soul, Rap, etc. It is not bad to try out a variety of what is available but It is great to come up with something new. A lot of people have got great ideas but are not confident enough to try them out. What is stopping you?

It may not be a scientific innovation, it may just be an artistic idea or an educational idea. Never settle for following what has been laid by others; although it is okay to learn from existing thoughts. Go a step further to create something new that will affect someone or a group of persons positively.