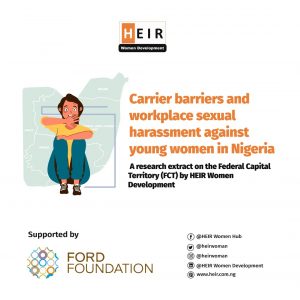 HEIR Women Development shared the findings from her self investigative research at the validation meeting held in Abuja yesterday 26th January 2022. The research is one of the activities under the project; Career Barriers and Workplace Sexual Harassment against Young Women in the FCT with support from Ford Foundation.

This is lauded by Ford Foundation as a germane project that seeks to identify with evidential data, the career barriers confronting young women with a lens into sexual harassment which has constituted a major limiting factor to women’s career journey at workplaces and participation in leadership. One of the goals of HEIR Women Development is to strengthen young women’s understanding and increase knowledge and awareness against sexual harassment through adequate information and knowledge, stakeholders involvement in prioritizing the trauma experiences and seeking to eliminate the triggers and amped media collective action in demanding accountability from organizations without relevant workplace policy that protects young women in organizations.

Speaking on behalf of HEIR Women Development, and the project, the Executive Director, Añuli Aniebo Ola-Olaniyi, in her opening remarks, posited the organization’s theory of change as follows- “if young women are empowered with adequate tools to recognize and report sexual harassment at work, then organizations are encouraged to develop and ensure compliance with sexual harassment policies then young women will have to be equipped to excel in their career and leadership aspirations.

HEIR Women Development held her research validation meeting and was attended by the Olufunke Baruwa, West Africa Project Officer on Gender, Racial and Ethnic Justice for Ford Foundation, Fatima Kakuri, SA Gender to Speaker House of Representatives, Adaora Onyechere, Head, Gender at African Union, women-led organizations representatives, members of the press and stakeholders. Summary of the findings was presented by one of the team members, a technical research expert at HEIR Women Development, Dr. Obianuju.

The research incorporated 60 In-depth Interviews of which 13.3% are women with disabilities and an Online Survey of 1000 respondents. 55% of the respondents are from the private sector, 26% are engaged in the public sector while 19% are in the development sectors. The key findings from the research are highlighted below;

3 in 5 women (57%) have experienced physical sexual harassment which respondents reported in form of unwelcomed touching, deliberate pinching among others. 14% of the respondent revealed that they have been raped at work. The major perpetrators of sexual harassment at work are seen to be bosses or superior as 91% reported. Also, 3 in 4 (74%) of these women have experienced online stalking while 68% attest to receiving persistent emails, invitations sexual nature with 81% confirming that this sexual harassment is being often.

Furthermore, only 33% of organizations were concerned about protecting women’s rights and this was supported by the fact that 68% of the respondent reported a lack of gender responsiveness in their organization. The possible justification is the fact that the Human Resources Department is often charged with the responsibility for drafting protective policies on sexual harassment. However, their goal is to protect the interest of bosses to the detriment of other staff.
Despite these scary statistics, just 49% of the respondents consider their workspace to be unsafe which is a clear indication of the low awareness among these women of what sexual harassment entails and its dangers.

It is on the premise of this, that HEIR Women Development recommended further engagement with the findings from the research and is scheduled to host a Career Development Workshop in the second quarter of 2022.