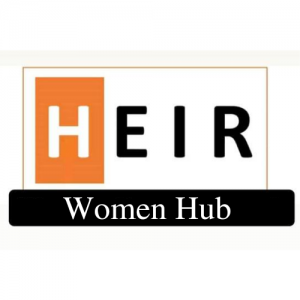 Blessing Sani, the communications Officer at HEIR Women Hub began by welcoming everyone to the meeting and giving a brief introduction about HEIR Women Hub. This was followed up by a slide presentation by the project officer, Blessing Ejeh who shared the research findings in detail. She mentioned that a lot of organizations do not checkmate the prevalence of workplace sexual harassment as 51% of respondents admitted that they have experienced some form of sexual harassment in the workspace.

The executive director, HEIR Women Hub Anuli Aniebo Ola-Olaniyi went on to say that HEIR Women Hub has been able to reach over 40 organizations with our research findings. She explained that part of the reasons for the meeting with Gender mobile was because they have been able to reach over 100 organizations with their projects on campus initiative on sexual harassment in tertiary institutions and also because we work in the same field, it would be great to work with them going forward.

Omowumi appreciated the Executive Director of HEIR Women Hub. She said it is always a pleasure for them to team up with other sister bodies geared towards deepening our word through strategic collaborations. She said she went through HWH research on workplace sexual harassment and commended HEIR Women Hub for doing a great job. She said that there are several resonances to sexual harassment irrespective of where it is found. She affirmed that HWH research further expands the power dynamics and cultural and social norms in the manifestation of sexual harassment. She said they had spent the last 4 years programming in the environment of learning and she admitted that the environment of learning is also a workplace for a lot of people. She spoke that there are a lot of similarities between the work they are doing and the work of HEIR Women Hub which suggests that there would be a meeting point for both organizations.

A colleague of Wumni, Eno appreciated the HEIR team for reaching out to them to discuss the research on workplace sexual harassment. She dwelt more on the concluding remarks of the research and asked what our interactions with other organizations have been like, considering the accountability of these organizations to address the issue of workplace sexual harassment in the FCT. The ED, HEIR Women Hub responded by explaining the stages the HEIR Team has been involved in, from conducting the research to organizing a validation meeting and a workshop where stakeholders from private, public, and development sectors were fully represented. Afterward, the team distributed copies of her research findings to several organizations and had advocacy visits to engage stakeholders. Currently, HEIR Women Hub is offering technical support to organizations in developing their sexual harassment policies stating that HEIR Women Hub has its Sexual Harassment Policy.

Sarah from Gender Mobile said the research was a great job done and what stood out for her was the section that had to do with the perpetrators of sexual harassment at the workplace, stating that the group with the highest percentage are the bosses and superiors at 91.5% which is quite similar to the one in the environment of learning where Gender Mobile work in making it focused on power centered harassment. She said she loved the layout of the overall presentation and said it was presented straight to the point while illustrating the information duly.