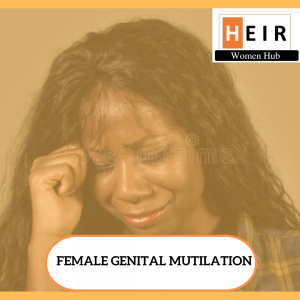 Female Genital Mutilation can be described in simple terms as the partial or complete removal of the external female genitalia. This is a horrendous act performed against females. FGM has no link to any medical practice and it is therefore deemed a breach of the rights of females.

FGM has led to an increase in the mortality rate of girls and young women. In 2012, 27% of women in Nigeria were said to have experienced FGM. FGM has had traditional and cultural backing, which is a reason why many tribes have refused to stop this gory act.

In 2015, then President Goodluck Ebele Jonathan of Nigeria signed a bill to abolish Female Genital Mutilation but this act has persisted in some other parts of the nation.

There are many consequences of FGM, some of which include;

– Death. Many young women do not get to survive the FGM process, therefore increasing the death rate of young girls.

– Infertility. FGM has been a major cause of infertility in women caused by infections and other complications.

– Loss of sexual pleasure. Women lose their ability to enjoy sex and have pleasure during intercourse with their partners.

With all of these horrible consequences, some cultures have refused to stop this act.

When we say we are advocating for girls and young women, we mean it and will do all it takes to ensure that our environment becomes a safe place for young women.