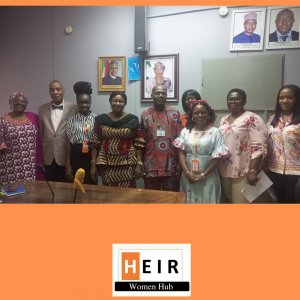 The Federal Ministry of Labour and Employment under the leadership of Senator Chris Ngige, authorized to meet up with HEIR Women Hub on the 11th of August 2022 to discuss the ratification of the ILO C190 in line with our research on Career Barriers and Workplace Sexual Harassment against Young Women in Nigeria. This is a project conducted by HEIR Women Hub and was supported by Ford Foundation.

HEIR Women Hub is aware of the fact the International Labour Congress (ILO) Convention on Workplace Sexual Harassment (C190) is a major instrument to curb the menace of sexual harassment within the work context. Nigeria happened to be one of the signatories of the C190 but we discovered that this convention was not yet ratified and domesticated in Nigeria.

The meeting began with a welcome address by Mrs. Juliana who introduced herself and welcomed the HEIR Women Hub team to the ministry. Blessing Ejeh, the Project Officer for HEIR Women Hub proceeded to a summary of the project on Career Barriers and Workplace
Sexual Harassment against Young Women in Nigeria as supported by Ford Foundation. Blessing mentioned the C190 from the International Labour Congress convention of which Nigeria is a signatory. She stated that the purpose of the meeting was to find out how the policy can be pushed to be ratified in Nigeria.

Mrs. Juliana appreciated and commented on the job of HEIR Women Hub and acknowledged Nigeria being a signatory to the ILO C190. Also, she said the convention has been signed by the Presidency and it is at its final stage which is submitting the instrument to the International Labour Organization office in Geneva for it to be ratified and would be completed before the year runs out.
The Executive Director of HEIR Women Hub, Añuli Aniebo Ola-Olaniyi expressed her joy on the ratification of C190 and commended the ministry for following this up. Also, the ED, HEIR Women Hub asked if the Ministry have received copies of our research findings and they admitted to having gotten copies of our findings. The Executive Director of HEIR women hub spoke to the representatives present about the organizations that have been reached with the research findings including the recent endorsement by the National Orientation Agency on this same project. She further asked how the HWH team can work with the ministry to ensure that the C190 is ratified in Nigeria and are ready to accompany the ministry to Geneva.

Mrs. Juliana said they appreciate us and are open to working with us. She said we can team up with them on sensitizing the public on the C190 to enable organizations and individuals to be in the know about this development. She also promised that the ministry will reach out to us on further development and engagements on the ILO C190 and any other thing that relates to Career Barriers at the Workplace. Mrs. Juliana mentioned that the Ministry of Labour and Employment and HEIR women’s Hub are currently partners in progress.

The advocacy visit ended on a good note with the attendees taking a group picture afterwards.