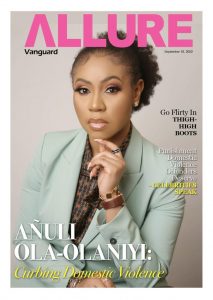 The Executive Director of HEIR Women Hub, Añuli Aniebo Ola-Olaniyi has made a lot of input when it comes to Gender matters.

She was featured on the Allure cover of the Vanguard newspaper just yesterday the 18th of September, 2022.

A lot was revealed in her interview and one striking part was when she spoke about verbal abuse and how it affects more people than can be imagined. In her words;

“Verbal abuse and threat, in my opinion, is a common form of abuse in our society and I say this even though we are yet to have data that shows the prevalence of verbal abuse and threat in all spaces. It’s an unfortunate situation that’s normalised. Now, the reports you and I see, which are very critical, are physical abuse- body harm, violation and defilement of minors, rape, murder, and sexual harassment. There are abuses like emotional, financial, neglect and threat that are either not reported or under-reported…”

Read more in Vanguard newspaper for Sunday the 18th of September 2022.