Do you know that the VAPP Act is the only legislation that is focused on Gender-Based violence and also provides compensation for victims? Since a lot of persons do not know about the VAPP Act, it is not widely domesticated in Nigeria.

Speaking with Ngozi Ike yesterday on an advocacy visit to the Gender-Based Violence Response Team in Abuja, she revealed to the HWD team that unlike before, people are more confident to report Gender-Based Violence cases to them either physically or by calling the emergency line. They have received numerous calls from around Nigeria and they have helped rescue some critical cases.

It is also stated that unless in life-threatening cases, no spouse has the right to throw out their partners from their homes. A lot of people do not know this.

If the Act is domesticated, there will be improvements in a lot that concern gender-based violence. Ngozi Ike and her team handed over copies of the VAPP Act to the HEIR Women Development team after the advocacy visit. 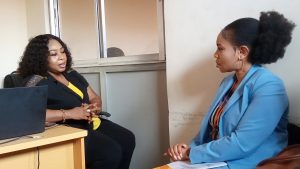 We won’t stop pushing until Gender-Based Violence becomes history in our society.This project is sponsored by Ford Foundation.