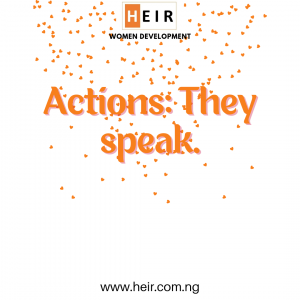 The saying “Action Speaks louder than words” isn’t an unfamiliar saying to you. As cliché as this phrase is, it holds a lot of truth.

People often judged us for things we did even before speaking a word.

• Take parenting, for instance, have you realized it is easier for kids to copy what they see you do than what you tell them to do? It isn’t surprising as many people on earth practice what they do not preach.

• This might be tricky; sometimes, it’s apparent that you’re doing the wrong stuff but do not want those around you to emulate you; you decided to, using words, pass the right message and expect your recipients to act accordingly.

• You may record zero or poor results from this. You can fail in business and possibly advise someone on business. You can’t be lacking at spending and perhaps give the best saving advice; even if you do, your words won’t hold water.

• Some people have said practice what you preach, but here is us urging you to preach what you practice; this will challenge you to do more personally.

The year is running; it’s coming with jaw-dropping challenges, do not stop at giving advice. Stretch toward being the advice people seek.

At HEIR Women Development, we are concerned about your wellbeing.

Make your actions speak what your words say.