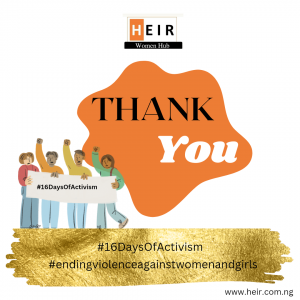 Every 25th of November is the International Day for the Elimination of Violence Against Women and the 10th of December is Human Rights Day.

This movement was initiated by activists at the induction of the Women’s Global Leadership Institute in 1991. It continues to be organized each year by the Center for Women’s Global Leadership. It is used as an organizing technique by people and organizations around the world to call for the prevention and elimination of violence against women and girls.

In support of this civil society initiative, the United Nations Secretary-General launched in 2008 the campaign UNITE by 2030 to End Violence against Women, which runs parallel to the 16 Days of Activism.

The 16 days of activism in 2022 was a big one for HEIR Women Hub. The Executive Director of HEIR Women Hub, Añuli Aniebo Ola-Olaniyi is big on conversations as it exposes so much, outlining problems and birthing solutions to a lot of underlining situations. It was in this light that HEIR Women Hub engaged with major stakeholders in live conversations to discuss issues around this year’s theme of the 16 days of activism which is; UNITE! Activism to end violence against women and girls.

This year, 2022 marks the 31st year since the start of the 16 days of activism which runs annually between November 25th to 10th December.

All the stakeholders we engaged applauded HEIR Women Hub for working tirelessly to ensure women’s rights are upheld by all in society and urged us to keep up with the good work as they also pledge to work with us to achieve these goals.

Our first speaker was Lois Aderemose the Executive Director of Good News Club Philippian Missions, a gender and FGM advocate. The topic discussed was; Unite! The Impact of Female Genital Mutilation in our Society. 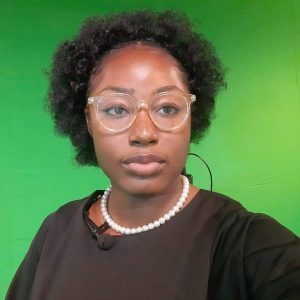 Aderemose revealed that there are around 200 million women globally who have had their genitals mutilated and 10% of these women and girls are Nigerians. Some effects of FGM include; the loss of sexual pleasure, horrible and life-long infections because of the poor hygienic processes involved, miscarriages amongst young women within the childbearing age, and many other effects.

Former President of Nigeria, Goodluck Jonathan signed a bill to end Female Genital Mutilation in Nigeria as it was declared an illegal act but the practice continues in some parts of Nigeria.
Ms. Aderemose expounded on the need for more advocacy and appreciated HEIR Women Hub for a good job.

Modupe Adetiba, the president of Nigeria Female Student Association of Nigeria (NFSAN) was our second guest during the 16 days of activism live sessions hosted by HEIR Women Hub. The topic for discussion was; Sexism and Politics: Its effect on Political Representation of women in Nigeria. 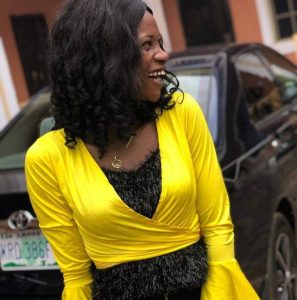 One striking part about our discussion with her was the fact that she was able to make references from her personal experiences over the past few years. She asserted that in as much as sexism is part of the reasons we record low representation of women in politics, there is a greater issue which is; women do not support women as much as they should do.

The session was concluded when Ms. Adetiba stated some remedies that can help succor the poor political representation of women in Nigeria and they are; Strategic positioning, Mentorship, Negotiation skills, and Preparedness.

Also, HEIR Women Hub hosted Mrs. Ngozi Jacintha Ike, the Desk Officer of the FCT Sexual and Gender-Based Violence Response Team in an online conversation. The topic was; UNITE! Using the instrument of the VAPP act to end violence against women and girls. 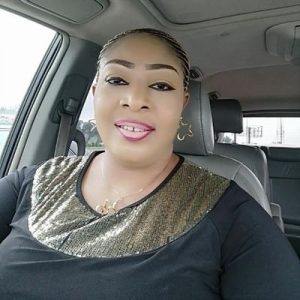 She stated that in the FCT alone, she and her team have recorded over 100 cases from the beginning of 2022 till date. She also mentioned how the VAPP act has come through for a lot of GBV survivors. The VAPP act mentioned about 26 crimes and their punishments. The VAPP Act has been published in other Nigerian languages to create a wider reach at the grassroots level. Mrs. Ike mentioned how they visit satellite towns to sensitize them on GBV issues.

Mrs. Ike urged those in the FCT to stop by their office at the Social Development Secretariat at the Center of Arts and Culture Area 10, Garki- Abuja to get copies of the VAPP Act for free. The hotline for reporting cases of GBV in the FCT is 08078111126.

Ending violence against women and girls wouldn’t be complete if Drug Abuse is not mentioned in all of these as violence has sent a lot of women into drug addiction to succor the effect of the trauma and pain they encounter amid abuse. It is in this light that HEIR Women Hub hosted Kenneth Anetor, the Co-founder and Executive Director of A New Thing International Foundation. The topic was; Unite! Violence against women and girls; its impact on drug abuse. 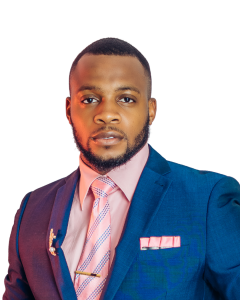 Mr. Anetor admitted that abuse has led a lot of women and girls into drugs and that the effect of drugs on women is different from the effect on men. The stigma women who are drug addicts face is a lot more than that of men. This has made getting therapy and helps for women challenging in Nigeria. Ending drug abuse in Nigeria and the world at large will directly or indirectly succor the effect and cause of violence against women and girls.

We engaged Uchenna Emelife who is a campus Journalist, a youth and social media advocate as well as a student at one of the prestigious universities in Nigeria. The topic of discussion was; Unite! The role of the media in advocating violence against women and girls. 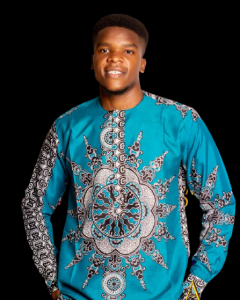 HEIR Women Hub engaged him on the 13th day of the 16 days of activism to discuss how the media can be used as a tool to raise activism to end violence against women and girls.

Emelife mentioned that the place of media advocacy can never be overemphasized, be it mainstream media or social media. Although, he asserted that some of the violent act that affects women and girls recently happen online where people come out openly to shade others. He said people need to be more intentional about the use of social media.

One key piece of information Emelife noted was that every individual on the internet space can be an advocate against the violence that affects women and girls.

The session ended when Mr. Emelife mentioned the challenges young ladies experience in Nigerian institutions and how they get little or no help. Emelife calls out for support and collaboration from CSOs and other well-meaning people to team up with them on campus to cushion these peril.

HEIR Women Hub was privileged to have a live session with Hon. Hannatu Mohammed, an Honorable board member of ICPC on the 15th day of the 16 days of activism 2022. The topic discussed was; Unite! Strategies to ending violence against women and girls. 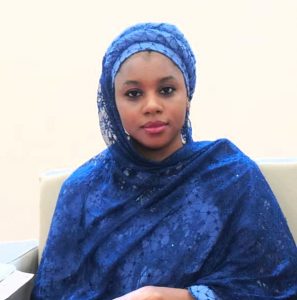 Hon. Mohammed came from a very optimistic point of view, not neglecting the challenges women and girls face but giving assertions that a bright future is achievable. She stated that religious platforms should be used to advocate violence against women and girls as this issue shouldn’t be swept under the carpet. She added that ICPC has a violence response team that attends to issues that concern all violent acts. This was good to find out as it is necessary to have as many bodies as possible that are readily available to bring justice as it concerns violence against women and girls.

In the conclusive part of the conversation with her, she mentioned that the future of young women and girls is Bright and every progress, no matter how little should be celebrated.
Amid the 16 days of activism, HEIR Women Hub launched a research survey to check the prevalence of workplace sexual harassment against women from the men’s perspective and the results so far are shocking.

HEIR Women Hub is committed to uniting with key stakeholders in ensuring women are safe as they strive to take on more leadership roles in society. Beyond the conversation, the HEIR Women Hub team will as always, continue to work tirelessly for this cause as we collaborate with others to ensure this is done.